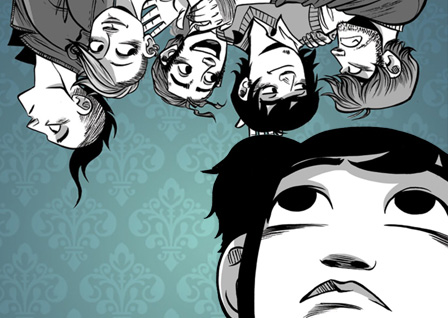 The town of Sandford, population 6092, is home to many nice, ordinary folk. But 14 year old Maggie RIPLEY isn’t ordinary. For one thing, Maggie’s three older brothers – DANIEL, LLOYD and ZANDER are her best friends; she’s grown up on action movies, plaid flannel shirts and fart jokes which she thinks is a pretty cool backstory. Then there’s the fact that Maggie’s been home schooled her entire life. Her mother’s been her only teacher, her family’s rambling old house her personal classroom. Everything falls apart though when Maggie’s mother abandons her family.

Maggie’s dad, newly appointed Police Chief, refuses to explain why their mother packed up and vanished.

Now, Maggie must start high school and face the fact that she has never made any friends of her own, and must learn how. There’s one more very strange and very important thing about Maggie. She’s haunted. A silent ghost has followed her around since she was six years old. And now the spirit, who only Maggie can see, joins her at her new school.

Scripted half hour series based on the graphic novel by Faith Erin Hicks.

In development with Zoic Studios